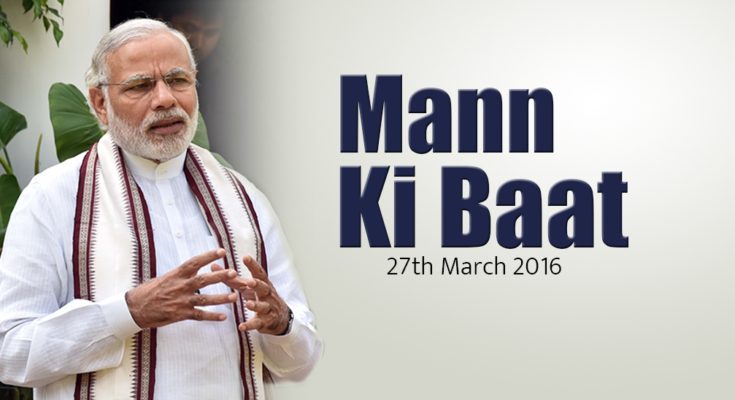 Farmers, Students, Industry, And Ambedkar were the topics of PM Modi on “Man Ki Baat”

Prime Minister Narendra Modi addressed the country through his radio program ‘Man Ki Baat’. In his 42nd live program, he mentioned some special people who worked with farmers through social work. PM greeted everyone for Ramnavmi for the countrymen at the beginning of the program and said that Ram is in the heart of Indians. Gandhi also used to take inspiration from Lord Ram.

PM Modi placed his opinion on the introduction of a Sanskrit course coming from the person named Komal Thakkar. He said, “Komalji we appreciate you for your love for Sanskrit. I have asked the concerned department to bring you the information about the efforts going forward.”

Modi said, “A rickshaw driver of Karimganj in Assam, Ahmed Ali, has built nine schools for poor children on the basis of their will. This is the indomitable will of the countrymen. An engineer’s daughter gave her first salary to build schools. Some women gave their jewelry. When I got to hear the story of Dr. Ajit Mohan Chaudhary, Kanpur, he went to the pavement to see and treat the poor with required medication. This is an opportunity to feel the charm of this country.”

The Prime Minister told the farmers that the agricultural marketing reformation in the country is also being done at a very broad level to get the fair value of the crop. PM Modi emphasizing the development of industries, said, “Baba Saheb has a large role in nation building. Babasaheb Ambedkar spoke about the industrialization of India. The industry was an effective medium for them, in which the poor could be provided employment. Today India has revolutionized as an intense spot in the global economy and today the maximum FDI around the globe is approaching to India.